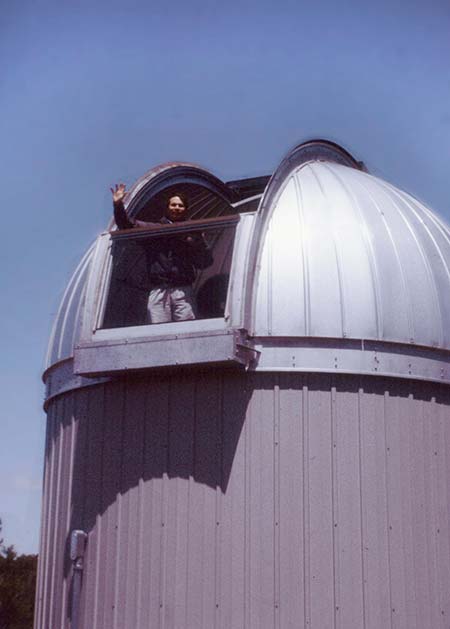 Windowpane Observatory right after completion in 1988. To learn more about the observatory, click here.

William Georgevich began gazing at the heavens when he received his first telescope at age seven. Bill's astronomical career had a great beginning when he was privileged enough to begin his astronomical studies at 16 under the aegis of Clyde Tombaugh, the only living discoverer of a planet (Pluto).

Mentored by Ulrich Hermann while attending the University of Texas, Bill made a personal commitment to build his own observatory to study fast-breaking transient cosmic phenomena. Twenty years later, that dream was realized with the founding of Windowpane Observatory, a privately-owned facility dedicated to the discovery of comets, supernovae, and Earth-bound asteroids.

"You can identify an astronomer by the fact that whenever they step out the door at night, they look up. To understand and be oriented to the night sky is far more than merely educational. Finding your place in the universe gives every human a cosmic perspective on their life and its relationship to time and space. I believe that a human being cannot fully grasp their existence without this knowledge and experience. Expanding one's awareness beyond the confines of this planet gives us the cosmic perspective to cope with our daily problems here on Earth. It's my intention to actively share this perspective with others."